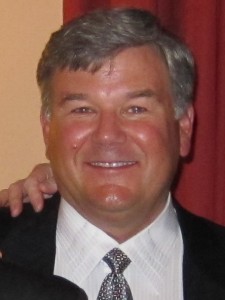 Greg joined California Beta (CABE) of SAE at UC Berkeley in the Fall of 1976 as a Junior. During his two years at CABE prior to graduation, Greg served as the Eminent Archon, Chapter House Manager, and Chapter Steward. He held offices his entire career as an Active member of CABE except during his Pledge quarter. Greg attended the SAE National Leadership school during the summer of 1977 and contributed to the Province Kappa Leadership School while Chapter Eminent Archon. During his term as Eminent Archon, Greg worked closely with the House Corporation and active brothers to achieve Chapter financial stability.

Greg attended the US Military Academy at West Point from 1973-1975. Greg began his studies at UC Berkeley in March, 1976 after leaving West Point in the Fall of 1975. Greg graduated from UC Berkeley in June, 1978 with a BS in Industrial Engineering and Operations Research and joined the Administrative Services (Consulting) Division of Arthur Andersen & Co. upon graduation.

Greg spent twenty five years working as a consultant for Arthur Andersen & Co. which later became Accenture. Greg was admitted as a General Partner to Arthur Andersen & Co. after nine years with the Firm. He continued to serve as a General Partner in Accenture during which time Greg served clients in the High Tech, Financial Services, Utilities, Government, and Oil & Gas industries. Greg was instrumental in developing Accenture’s global IT Strategy practice, he was responsible for developing their global practice methodologies and standards, and finished his career leading Accenture’s global Semi-Conductor industry practice.

After his career at Accenture, Greg became active giving back to his local community. He coached his son’s soccer and lacrosse teams, became a local youth soccer referee, and led his boy’s local Boy Scout Troop of 135 boys as its Scoutmaster for three years. To this day, Greg continues to teach High Adventure navigation skills to Adult Boy Scout Leaders. Greg also volunteers his time to US Professional Cycling races each summer.

As an SAE alumnus, Greg has served as the President of the CABE House Corporation, Chapter Advisor to CABE, as the President of the San Francisco Bay Area SAE Alumni Organization, and is currently a Trustee for the SAE Foundation, CABE Chapter Advisor, and member of the CABE House Corporation. Greg’s service to SAE as an alumnus has spanned thirty five years with the most active roles being during the first and last decades of that timeframe.

Currently, Greg resides in Glenbrook, Nevada on the East shore of Lake Tahoe. He has two sons; one who graduated from California State University at Chico in 2013 and another who is due to graduate from Chico in 2015.