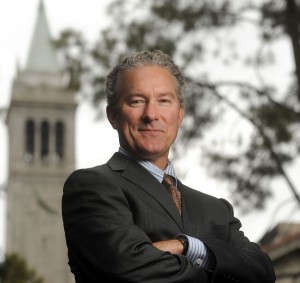 Richard K. Lyons became the Bank of America Dean of the Haas School of Business, University of California, Berkeley, in July 2008. He pledged Cal Beta fall of 1979 and was House Manager his sophomore year. According to Rich, “Living in the SAE house from my freshman year got me thinking from the get-go about what was involved in keeping a house going. The issues are not unlike those that keep businesses going and thriving. Also, the camaraderie among the brothers is the kind of connection that one strives for in other parts of life. These were good lessons for the rest of my life.”

Following completion of his undergraduate studies at Berkeley in 1982, Rich went on to earn a PhD in international and macroeconomics from the Massachusetts Institute of Technology (MIT) in 1987. He began his teaching career at Columbia University’s Graduate School of Business in New York, where he served on the faculty from 1987 until he joined the Haas School faculty in 1993. In 1998 Rich received UC Berkeley’s highest teaching honor, the Distinguished Teaching Award. His students have honored him with the Haas School’s Cheit Award for Excellence in Teaching six times.

Prior to becoming dean, Rich also served as the chief learning officer at Goldman Sachs in New York, where he was responsible for leadership development among the firm’s managing directors.

Dean Lyons has focused much of his time refining the Haas School’s strategic plan to leverage the traits that are distinctively Berkeley. He has also launched the public phase of a $300 million capital campaign, the Campaign for Haas. Its goals are centered on transforming the Haas School campus, building a curriculum based on the Berkeley-Haas approach to leadership, and aggressively expanding the school’s faculty and its support for research.

Under Rich’s leadership, the Haas School is developing a world-wide reputation for exploring the links between leadership and innovation in organizations. These links are strategically important to developing the kinds of future business leaders that are highly desirable to both existing firms as well as startups. The strategy is clearly working as the Haas School is currently listed in the top ten of virtually every nationally published MBA ranking.

Rich and his wife Jen, also a Berkeley alum (MBA ’96), have two kids, Jake (14) and Nicole (11). They live in Berkeley and love skiing in Tahoe together. Rich enjoys singing and playing the guitar and when there’s time, he and his friends get together to play their favorite rock songs.