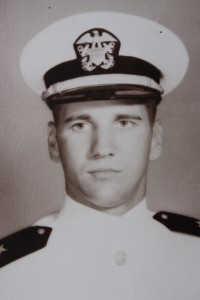 CDR James B. Mills was born Aug. 31, 1940 in Stigler, Oklahoma. In 1946, he moved with his family to Kern County, California, living in Wasco, Kernville and, finally, in Bakersfield, in the central San Joaquin Valley. He graduated in 1958 from Bakersfield High School, where he compiled an enviable record of academic achievement and extracurricular activities. Jim held several class offices and was elected Student Body Vice President his senior year. He earned letters for four years each in basketball, football, and track. He was active in several campus clubs and was awarded a Senior Service Award, one of twenty students so honored among a class of over 800.

Jim attended Bakersfield College for one year before transferring to Cal where he earned his B.A. in Business Administration in 1962. He pledged SAE Cal Beta in the fall of 1959 and was a stalwart in many of the chapter’s championship intramural teams of that era.

Jim’s first tour of duty after training was aboard the USS Midway as a Radar Intercept Operator, back-seater on a Phantom F4B. He successfully flew 148 combat missions over North Vietnam during that tour. On an early mission of his second tour, however, flying off the USS Coral Sea, his Phantom F4B failed to return to the carrier. He was last known to have been over a target 20 miles north of the DMZ in North Vietnam. He was declared Missing in Action (MIA) on September 21,1966. During the Carter administration all of the POWs (Prisoners of War) and MIAs except one were declared presumed dead, changing the official status in which Jim is now carried to PFOD (Presumptive Finding Of Death).

Jim’s family has been very active in the National League of Families of Prisoners and Missing in Southeast Asia since its inception in 1970. Now known widely by its abbreviated name, National League of POW/MIA Families, the primary goal has remained achieving the fullest possible accounting for all Americans missing, prisoner or killed-in-action/body-not-recovered from the Vietnam War. Jim’s parents, the late Lois and E.C. “Bus” Mills, attended the League’s first meeting. Mr. Mills served one year as Executive Director of the League. Jim’s sister, Ann Mills-Griffiths, served in that capacity for over 30 years and retains her elected position on the Board of Directors, now serving as Chairman. Mr. & Mrs. Mills, Ann, and Jim’s other sister, Judie Mills Taber, have all served in various capacities such as state and regional coordinators and have spoken to military and civilian audiences all over the world.

Currently Ann lives in Arlington, VA, near the location of the League’s national office, Judie lives in La Habra, California, and his brother, Bill, lives in Dublin, California. Jim has seven nieces and nephews, and a large extended family. All are relieved that his aircraft was recently located underwater, indicating a very likely immediate death. Concrete answers to end the family’s uncertainty are now believed to be in reach. Another underwater excavation of the crash site is expected in May or June, 2013. 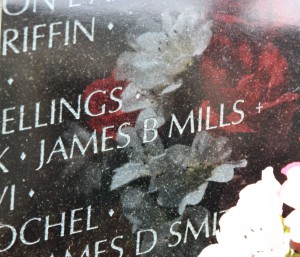