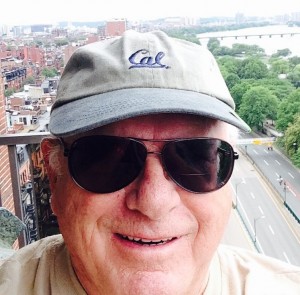 My time at Cal and being a member of SAE Cal Beta was certainly one of the most enjoyable eras of my life.

My pledge class was most likely the best of all. Four high school student body presidents, six first-string athletes (2 football QBs, baseball, swimming and a world class Canadian tennis player, plus an outstanding golfer). From that nucleus we formed a very formidable group of True Gentlemen.

If it had not been for SAE, I don’t believe I would have ever graduated from the University of California. I’ve been thankful ever since, and as a result, I have supported Cal Beta in many ways over the years. The highest point of my undergraduate experience was serving as Deputy Eminent Archon under Claude Rohwer.

As far as my participation throughout the years, it has always been with great passion for SAE and Cal. I have great memories of capers, parties, dances, Duck Dinners, Big Games, and I cherish my lifelong friendships that began at 2722 Bancroft Way.

My pledge class procured the original lions that guard the front of the chapter house. They were acquired from the San Jose State DU’s who had inappropriately removed them from the entrance to a Grand Hotel on El Camino Real. After realizing they had no use for the Lions (and the police would most likely be visiting the fraternity houses) they offered to sell them to the San Jose State Cal Zeta Chapter for $50 each. Cal Zeta turned them down and they were then offered to Cal Beta. We also turned down the offer.

But since there were four of us in the pledge class from San Jose who knew the town well, we decided to visit the DU house one night and remove their ill-gotten gains and help clear their consciences. Our beautiful rebuilt lions (the originals were dynamited in 1956) still stand as sentinels of the Cal Beta house.

Another contribution that stemmed from passion and brotherhood was the acquisition of our great bell. We had learned of a house at the University of Pacific that collected bells of all sizes at the expense of their owners. We needed a great bell to call our meetings and dinners. It was learned that a dance was being held in San Francisco and that the entire UOP student body would be attending. So a group of us ventured to UOP, found the house of bells and selected the largest one we could carry out. It still resides in our quad.

During my undergrad years our Intramural accomplishments were legendary. I participated in as many teams as possible. Our pledge class was instrumental in winning the University Championship in football. And through the years, we were part of many other championships as well. You name the sport, and at one time or another, we were champions. Our hallway wall used to be filled with championship plaques. Where are they now? I doubt that even Paul Manolis knows.

My athletic endeavors for Cal were participation as a diver on the swimming team. My best effort was 3rd place in the Pac-8 championships. I did earn my varsity letter and many years later served on the Board of the Big C.

In the world of business, I began selling $10,000 life insurance policies to my SAE brothers during my junior year. (Bill MacLaughlin still has his.) After graduation I married Mona Palmer Onstead, of Salt Lake City and Stanford. I entered the US Army for two years and returned to San Jose to work for the Provident Mutual Life Company.

I earned my Chartered Life Underwriter (CLU) designation in 1964 and my Chartered Financial Consultant (ChFP) designation in 1969. In 1976 I joined the Guardian Life Insurance Company and my career expanded to Financial Planning. I am now in my 61styear and still semi-active as an independent agent. Life insurance or annuities, anyone? I qualified as a member of the Million Dollar Roundtable ten times. I have served on the boards of the National Association of Life Underwriters and the Chartered Life Underwriters Association

In the community I have participated in several organizations including the YMCA, where I was the Chairman of their main fund raiser.   I have also served on the boards of Multiple Sclerosis, the Eastfield Children’s Home, the Santa Clara County Cal Club, and the San Jose Country Club. I have helped raise money for Spartan Stadium, the Center for Literary Arts, the American Beethoven Society and Cal Beta.

I am also a Bear Backer and helped establish the “Sheldon Onstead Field Hockey Fund” for the benefit of the Cal Field Hockey program. At times we will run a $1.00 for $1.00 matching gift, so let me know if you are interested in helping out. I must mention that my daughter Shellie Onstead has been the head coach for the last 21 years. And they are having a very good 2015 season. (With no field to practice or play on – bus to Stanford to practice- and all home games are away at UOP or Stanford).

For Cal Beta, I have contributed sums for needed items at various times and to the Scholarship fund. Never a great amount but helped as I could.

These are just a few of the wonderful experiences I have enjoyed as a result of being a member of the CAL BETA CHAPTER of Sigma Alpha Epsilon. There are MANY more. GO BEARS! Phi Alpha!!